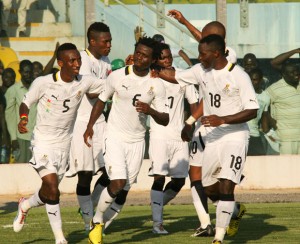 Ghana can set up a quarter-final meeting with Cape Verde at the Africa Cup of Nations if they top their section by winning the last Group B match on Monday.

The Black Stars be up against a Niger in Port Elizabeth when the group campaign reaches it climax.

And Kick-off is at 17:00 GMT at the Nelson Mandela Bay Stadium.

A 1-0 win against Mali after an opening 2-2 draw with DR Congo put the Black Stars in the driving seat of finishing tops in the group.

But Ghana coach, Kwesi Appiah who will be without the suspended Mubarak Wakaso is seeking a strong finish to the group campaign.

“We’ve played two games and for me the next game is the most difficult one,” Appiah said.

“Looking at the Niger team, they are tactically very disciplined and I see it as a game that will be very difficult for us and for that reason we need to prepare very well.”

Niger, who earned their first point in the finals of an Africa Cup of Nations after drawing 0-0 with DR Congo after losing all three games in 2012 are expected to present the Black Stars with a tough competition.

“I’ve seen that the crowd [in Port Elizabeth] was with us and it was a good atmosphere in the stadium and I hope my players will do the same against Ghana.”