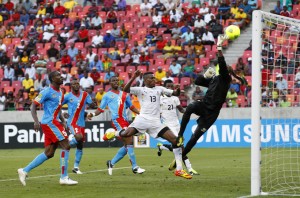 Mali have snatched a spot in the final eight of the Africa Cup of Nations courtesy of a 1-1 draw with DR Congo.

The Leopards failed to progress past the group phase, despite taking the lead in South Africa through Dieumerci Mbokani, who fired the ball into the roof of the net after just three minutes.

The perfect start for Congo only lasted for 11 minutes as Mali striker Mahamadou Samassa, who was brought in for today’s clash, found an equaliser to put Mali on top.

The forward hammered the ball into the back of the net from six yards out in a calm finish, which put Mali on the frontfoot until the half-time whistle.

Mali made a different tactical approach in the second half by trying to hold onto their draw and wasting as much time as possible, while Congo boss Claude Le Roy tried to urge his players on from the sidelines.

Despite the fact that just one goal would be able to turn things around for Congo, the Leopards failed to find that extra burst of energy to cause Mali an upset.