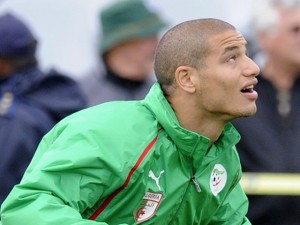 Beaten in extra time against Tunisia (1-0), the partners Fennecs, rulers, have made surprise by Togo of Emmanuel Adebayor (2-0).

After two defeats, the Greens are removed from the AFCON 2013.

On the eve of the game against the Elephants of Cote d’Ivoire, the third group stage for Algeria in the AFCON 2013, Adlene Guedioura, think it is not necessary to make changes in the Greens.“You can not blame us for our competitiveness, our ambition, our style of play The only thing you can blame is not to have scored.”

“I think against Togo, we played well again, unfortunately luck was not with us.”

“We respect the game and respect our country. We will try to beat the Elephants. “ He added,

“It is not good to finish with three losses, because we deserve better than losing the first two games. We have many young players and we look forward to the next qualifying matches of the 2014 World Cup. “