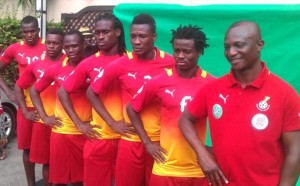 Black Stars might have booked a last eight place at the ongoing Africa Cup of Nations in South Africa, but Coach, Kwasi Appiah insists his charges are only half way through their true potentials.

Appiah says his team has a lot of proving to do despite thumping Niger 3-0 to authenticate a hold in Group B and set up a date with debutants, Cape Verde in Port Elizabeth on Saturday.

“My players stepped up their performance and that prevented Niger from coming out like that. When you build a team in a competition, you cannot expect them at their highest level all at once. I will say we are halfway through.”

Goals from captain Asamoah Gyan, Christian Atsu and John Boye put Ghana through to the quarter finals of the biannual gathering that piece together Africa’s best 16 teams together.

Appiah says Ghana will approach the game with Cape Verde with the seriousness it deserves at the competition the Black Stars yearn to win for a fifth Nations Cup Glory.

The Stars last year defeated Cape Verde 1-0 in a friendly game in Portugal, but Appiah says that result will count for nothing unless Ghana can tower the debutants on Saturday.

“In a friendly game, I do not look at the score line. I look at the tactical ability of my team. Cape Verde is a very tactically discipline side and I respect them.”

Ghana are favoured in the game against Cape Verde.