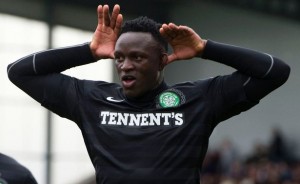 The Scotsman claim that Kenyan FA President Sam Nyamweya has made it abundantly clear that Celtic midfielder Victor Wanyama is heading to either Man United or Arsenal “soon”.

The official stated that the Kenyan international was heading to the Premier League and that the youngster will quit Parkhead soon adding,

“Wanyama will soon be joining one of the big two clubs in the world. It is an exciting moment for us, which means that Kenya is a powerhouse in football.”

The 21 year old Celtic star is valued at around £10m, more than ten times the £900k fee that the Glasgow side paid Germinal Beerschot just over 18 months ago.

Celtic boss Neil Lennon is fighting a real battle to keep hold of his star performers with Wanyama and striker Gary Hooper both strongly linked with a move to the Premier League.

One would have thought that both players would like to stick with Celtic until at least the summer given that the club have a massive Champions League encounter with Juventus coming up.

Both Man United & Arsenal have been repeatedly linked with a move for Wanyama with both sides seemingly very short on defensive midfield options.