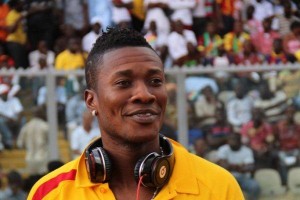 The surrendered a two-goal lead to draw 2-2 against the Leopards but revived their campaign to beat Mali 1-0 in their second game.

The West African giants put up perhaps their best performance in the tournament with a commanding 3-0 success over less-fancied Niger at the Nelson Mandela Bay stadium in Port Elizabeth on Monday night.

The Al Ain attacker, who scored his first goal in the tournament and provided two assists in the win over the Menas, says confidence has sky-rocketed ahead of Saturday’s quarter-final clash against Cape Verde.

“We came here with the mentality of doing well in this Nations Cup. I think the players have agreed,” Gyan said

“Today was a great day for us and we’re thinking about the next game and make sure we do better for the nation.

“All the players are happy and their confidence level is growing and I believe we’ll go into the next game with a strong conviction.”

The Black Stars will play Cape Verde in the first quarter-final on Saturday in Port Elizabeth.