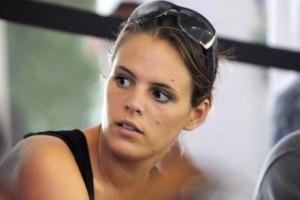 As expected, Laure Manaudou announced her retirement tonight at the Grand Journal on Canal +.

“I’m stoping. I swear that I’m stoping once for good and this time i won’t come back again. I’m expecting a happy event. I think it was the right time to stop. I was lucky to have a competition in France; the European Championships is an opportunity to prosper before the French public. I was successful but I do not know if this situation can still the same. Unfortunately his does not depend on me; it is very difficult to still being the best. At a certain time it was crucial to make a decision and i make sure i do not take it when it is too late. “

She has collected a total of 96 medals in 12 years of career; broke  seven world records, 15 European records and 78 France records (small and large basin).