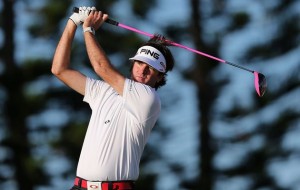 Bubba Watson Masters champion will be much leaner and lighter than usual when he returns to PGA Tour action at this week’s Phoenix Open after pulling out before the start of last week’s event in San Diego because of flu.

Having also battled a sore throat during the PGA Tour’s season-opening Hyundai Tournament of Champions in Maui where he tied for fourth, the American left-hander has endured a rough start to his 2013 campaign.

“My energy level is not where I want it to be, about 80 percent right now,” Watson told reporters at the TPCScottsdale in Arizona on Wednesday after partnering former Olympic swimmer Michael Phelps in the pro-am competition.

“I’ve had about seven days off taking medicine, so I’m still kind of under the weather trying to get the medicine out of me, kind of groggy.”

“It’s a struggle. My golf game is not where I want it to be. I’ve lost about 10 pounds since Maui, but I want to be out there competing. Hopefully I can get some juices flowing and play good this week.”

Irishman Harrington, who like Kaymer is playing in the $6.2 million (3.9 million pounds) Phoenix Open for the first time, was in an upbeat mood after producing good putting form in his first two European Tour starts of the year.

“Certainly if the first two weeks are anything to go by, it was in good stead,” he said of his fourth place at the Volvo Golf Champions and a tie for 23rd at the Abu Dhabi HSBC Golf Championship.

“If I can play, swing and hit the golf ball like I did last year and putt like I did in those two events, things are looking good for me. I’m quietly confident going forward.”

Asked for his initial impressions of the TPC Scottsdale, Harrington replied: “It’s a good test of golf. The greens are really nice.”

“But it’s probably not quite what I expected. I knew I was coming to a desert golf course, and the front nine doesn’t quite look like that most of the time. There are quite a lot of trees.”

“It kind of plays and looks like a regular tree-lined course but if you do go into that desert, it doesn’t seem to stop running into it and finishes in a cactus.”