Dereck Chisora who is a boxer is hoping to get his career back on track when he takes part in a big unification showdown slated for March 16 at the Wembley Arena in England.

On the list of fighters that are expected to battle it out on that day, the Zimbabwe-born pugilist’s name is in.

Some of the stars poised to attend the show headlined “Rule of Brittania” are Ricky Burns, Nathan Cleverly, George Grooves, Miguel Vazquez and Liam Walsh.

Frank Warren event promoter said Chisora would feature in a ten-round international bout with his opponent to be announced “in due course”.

Furthermore, this fight is subjected to him successfully reapplying for a British Boxing Board Control licence.

Chisora was stripped of his licence following a news conference brawl with David Haye in Munich, Germany, last February. 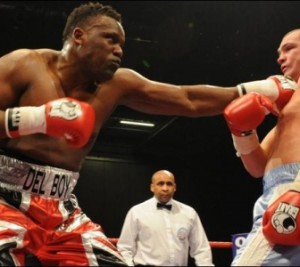 Chisora slapped Vitali Klitschko at the weigh-in for their WBC World Heavyweight title clash before spitting on Wladimir Klitschko’s face just before the first bell, prior to his bust-up with Haye

But the former British and Commonwealth champion has said he will be at his most disciplined self at the Wembley Arena.

“I promise to behave. Cross my heart and hope to die,” Chisora said.

Warren said: “Dereck Chisora, won’t be allowed to fight until he gets his licence. The board is going to have a hearing. It’s been a year since those terrible scenes in Germany. Since then, there was the show at West Ham. He’s matured a lot.”

Since his ban after the brawl in Germany, Chisora has, however, participated in a fight — a grudge fight against Haye at Upton Park Arena, but the boxer was stopped in the fifth round of the entertaining match.

The match took place under the auspices of the Luxembourg Boxing Federation and the 29-year-old will now make his case to the British Boxing Board of Control.

Chisora’s last official fight was in February last year when he pushed long reigning WBC World champion Klitschko all the way since Lennox Lewis did, and the controversial fighter will be looking to work his way back into challenging for a world title.