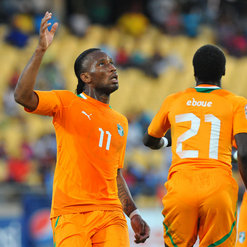 The elephants are “out”, the 34-year-old striker said “it’s over” in the wake of yet another failure by the so-called golden generation.

The trophy has eluded the Elephants since 1992 – the year they beat Ghana in a marathon penalty shoot-out.

The Ivorians have twice been runners-up in the last four editions, and were semi-finalists in 2008.

For a fifth successive tournament, they were tipped to win the title with a squad boasting such talents as Drogba, Yaya Toure and Salomon Kalou.

But Africa’s top-ranked team once again failed to live up to expectation and go home empty-handed.

“We now look ahead to the World Cup, with or without me,” said Drogba.

Defender Sol Bamba says he fears for the future of head coach Sabri Lamouchi after the quarter-final exit.

“The players want (Lamouchi) to stay but it’s difficult to say, in Africa when you lose a game, they’re used to sacking the manager,” Bamba told BBC Sport.

“Hopefully it’s not the case but we’ll have to wait and see.”

Lamouchi took over as Ivory Coast head coach in May after the previous coach, Francois Zahoui was sacked, despite taking the team to the final of the 2012 Africa Cup of Nations in Gabon and Equatorial Guinea.

The 41-year-old former French international had no previous coaching experience.

There has been speculation that a number of players are now coming to the end of their international careers but Bamba hopes the current squad can stay together going into the 2014 World Cup.

He said: “Football’s about ups and downs and when you’re down you learn and you have to stand up.

“We’re very disappointed but it’s not finished at all.

“We’ve got the qualifiers for the World Cup to play, so we’re looking forward to it.”