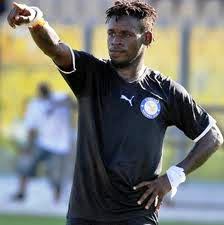 The 2012 Caf Champions League goal king has severed ties with the Tunisian champions on mutual grounds over nonpayment of fees to former club Berekum Chelsea.

Ghana striker Emmanuel Clottey has terminated his contract with Tunisian side Esperance.

Clottey’s former club Berekum Chelsea has confirmed the Blood and Gold were unable to fufill their part of the contract terms leading to the termination of the contract by mutual consent.

“Clottey got a three-year contract and as a club, we were supposed to get $1.5 million as the transfer fee. Clottey himself was to receive $500,000 a year for the duration of the contract,” Chelsea’s spokesperson, Isaac Amponsah told Kumasi-based radio station Boss FM.

“However, certain restrictions prevent Esperance from paying such an amount of money directly to a club outside the country and so it meant that it would take a very long time for us to receive the money. That, coupled with their reluctance to pay the money, led us to contact them in a bid to terminate the contract.”

The Blues have also confirmed that the striker, who is on a national duty with the Black Stars in the 2013 Africa Cup of Nations tournament in South Africa, will return to the club whiles they work on other deals having been linked with TP Mazembe and other clubs.

“He is our player and so he will come to us, but many clubs are interested in signing him. So we are also helping to get him a suitable club,” the club spokesperson added.

The 25-year old signed for Esperance on a three-year contract in September 2012 after his standout performance in the Caf Champions League scoring 12 goals in 11 matches.