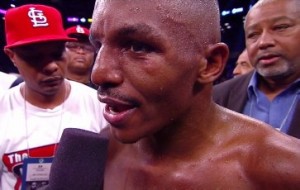 Devon Alexander will be forced to fight Kell Brook or loses his world title.

The 25-year-old who is of Alexander to face Brook on February 23 in Detroit but pulled out on Monday after injuring his biceps.

But the IBF has confirmed that Alexander will not be allowed to sidestep Brook without giving up his belt. Floyd Mayweather Junior then tweeted that he was close to agreeing a unification fight with Alexander for the IBF and WBC welterweight titles in Las Vegas on May

Under the organisation’s rules, the champion can normally apply for an exemption from fighting his mandatory challenger, as super middleweight Carl Froch has done in order to fight Mikkel Kessler.

But because Alexander has signed a contract to fight Sheffield-born Brook, that option is no longer open to him. 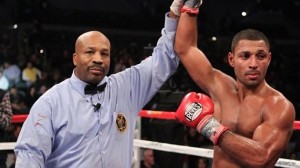 The IBF also confirmed that they have not been approached by the Mayweather camp.

The five-weight world champion, who has not fought since spending two months in prison for assault last year, tweeted last night: ‘The negotiations for my fight are almost done. The front-runner is IBF champion Devon Alexander. It’d be a unification bout at welterweight.’

The 26-year-old admitted he was ‘gutted’ after the American pulled out but later vowed: ‘I have been in camp for 12 weeks, I want to do damage. Alexander, a vacant belt or even Mayweather I don’t care!’

Mayweather, who is unbeaten in 43 bouts, had been expected to face either Robert Guerrero or Saul Alvarez on Cinco de Mayo.

If Alexander does give up his belt, Brook would likely fight for the vacant title.

His clash with Alexander was originally due to take place on January 19 but an ankle injury forced the Sheffield star to request a delay.