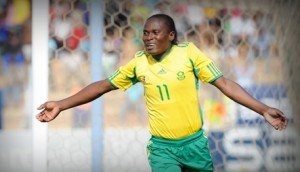 Accustomed to podiums, Matlou is the only South African football player to win the title of the best footballer in 2008 after a great performance ending the best striker in Afcon Ladies with 6 achievements.

She also won the awards of Cosafa (Confederation of South African Football Association) for having scored 14 goals in just 5 games at the end of the competition.

In 2011, Matlou was awarded the Sportswoman of the Year in South Africa.

The 27-year player scored 40 goals in 45 games with the national team. The striker of South Africa participated in 2012 the female tournament in the  2012 Olympic Games in London.