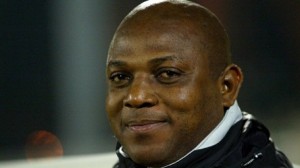 Stephen Keshi is the happiest of the coaches tonight! Beating Burkina Faso in the final of Afcon 2013, he comes just to win his second Afcon, this time as Coach.

“I  won Afcon 18 years ago as a player! Football changes every second and coaching is something else. I do not talk about the past and I want to move forward. The most important thing is that I have confidence in myself and my players. (…) The 1994 team took 5 years to build while the current team has only 5 weeks. We are growing and I’m trying to build something. The 1994 team was great, its state of mind was amazing and we were like brothers. This one has talent; and it has also proved tonight that it had a great attitude and a great character “

A sacred journey! Even if he suffers from a lack of consideration, especially abroad. He launched a few days ago: “I’m not against white coaches. White coaches are great but there should not be mediocre coaches, someone who cannot help Africans. That’s all I said. I never said I was against white coaches. But I can never train in Europe because they think I’m not qualified enough to do so. “

“I dedicate this success to God and Nigerians who expected that long. I wanted to bring smiles to Nigerians. “