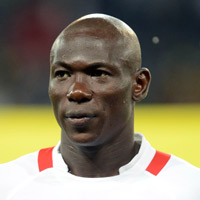 Burkina Faso striker may have played his last game for the Stallions last Sunday when it came into play in the final of the AFCON 2013. Moumouni Dagano 32 years old is getting any younger and feels the weight of age.

According to the entourage of the player picked up by media Burkinabe Dagano dream to put an end to his international career. The former player of French Ligue 1 Sochaux played in all 6 AFCON and remains one of the most prolific scorers in the national team.