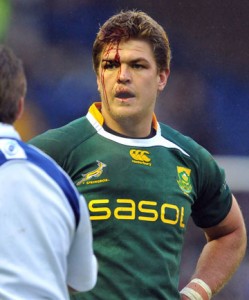 Juan Smith has retired days after injuring himself in a comeback game ahead of the new season, local media reported.

The 31-year-old from the Cheetahs was hurt at the weekend on his return after a two-year break following an Achilles tendon injury, which necessitated four operations.

A scan on Monday revealed further damage after which Smith decided to quit, the Bloemfontein newspaper Die Volksblad reported.

Smith, who won 69 caps, was part of South Africa’s World Cup winning team in 2007. He also captained the Springboks against the Barbarians at Twickenham in 2010.