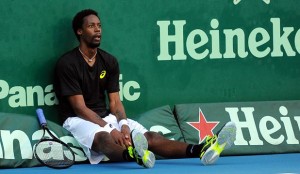 The second-seeded Argentine, last year’s runner-up, used a single break in each set to overcome Monfils, who showed flashes of his unpredictable genius but not enough consistency to survive Del Potro’s booming serve and barrage of accurate ground strokes.

The 2009 U.S. Open champion broke Monfils on the Frenchman’s first service game and was only seriously tested once on his own serve, in the ninth game, when Monfils used his trademark return-everything scrambling game to force a break point that he failed to convert.

It was a similar story in the second set, with Monfils producing the highlight-reel shots but unable to break Del Potro and eventually losing his serve to love in the eighth game.

In the day’s final match, Jarkko Nieminen took just an hour to cruise past David Goffin 6-0, 6-0. It was only the second ”double bagel” in the tournament’s history and the first since 1987.

Thiemo de Bakker followed fellow Dutchman Igor Sijsling into the second round earlier Tuesday when 2007 champion Mikhail Youzhny retired with a hip injury while trailing 4-1 in the final set.

Youzhny won the first set 6-3, before De Bakker’s powerful serve brought him back into the match, winning the second set 7-6 (2).

Sijsling produced the first major upset of the tournament on Monday by ousting third-seeded Jo-Wilfried Tsonga.

Robin Haase, a semifinalist last week in Zagreb, could not make it three Dutchmen in the second round as he was beaten by Ernests Gulbis 6-2, 6-1 in just 50 minutes.

Also, Frenchman Michael Llodra dropped out of the tournament through illness before his match with Julien Benneteau.