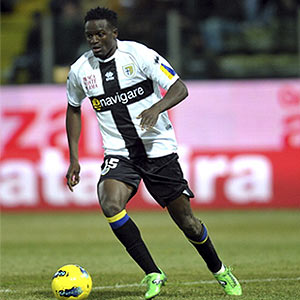 Kenyan midfielder MacDonald Mariga has been ruled out of action for three weeks after suffering an injury last weekend.

Mariga suffered the injury during Parma’s match against Genoa that saw him last only five minutes in the game.

“Parma FC announces that the diagnostic tests performed by Dr. Giulio Pasta highlighted McDonald Mariga, injured on Sunday in the opening minutes of Parma v Genoa has a lesion of the left thigh adductor miotendinea. The prognosis is about 20-25 days,” read the statement.

He did not feature in Kenya’s 3-0 win against Libya in a friendly match that was staged in Tunis last week.

It is not clear if he will be fit when the new Harambee Stars coach names his squad for the World Cup qualifier against African champions Nigeria next month.

He has failed to don the national colours for a year now due to injuries that have hampered his return.

Mariga joined Parma on loan till the end of the season from Inter Milan saying he was seeking playing time.

“I’m going to Parma, which is my home. I did not get a chance to play and did not have a chance.”