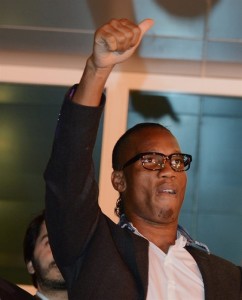 FIFA has granted a temporary license to Ivorian striker, Didier Drogba to play for Turkish outfit Galatasaray, the club he joined following the 2013 Africa Cup of Nations on a one-and-a-half season contract.

This agreement has been denounced by his former club Shanghai Shenhua, with which the captain of the Elephants is linked until December 2014, but the transfer was able to take place due to the non-payment of the player’s salary over a three-month period.

The former Chelsea striker passed his medical exam on Monday and should be operational Friday for week 22 of the Turkish Championship, which will see the Istanbul club play away against Akhisar Belediyespor.

Galatasaray, who are currently heading up the Turkish Super Lig with a five-point lead on Besiktas, have certainly reinforced their troops with the arrival of the Ivorian international, but also that of former Inter Milan Dutch midfielder, Wesley Sneijder.

And joining the Istanbul club also means that the former Marseille player will be competing in the UEFA Champions League again, where he is the current titleholder with Chelsea.

Drogba has already scored 39 goals in this competition which he holds very close to his heart, and he could be involved again as soon as February 20 with the hosting of the Germans of Schalke 04, in the first leg of the round of sixteen.

This new adventure for the Ivorian goal scorer following his short stint in China could also allow him to get back to the form required for the highest level of competition, in view of the 2014 World Cup in Brazil which he set as his final goal before international retirement.