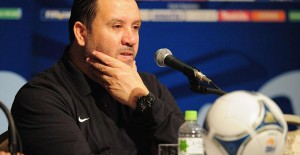 Unsurprisingly, Nabil Maaloul has been named Friday, coach of the Carthage Eagles.

The former coach of Esperance replaces Sami Trabelsi, who resigned following the poor results of the Afcon 2013.

Nabil Maaloul was preferred to Khaled Ben Yahia also in the running for this position of coach.

Nabil Maaloul who has a two-year contract, aims to qualify the Carthage Eagles for the World Cup 2014, Chan and Afcon 2015.

Two assistants will help Maaloul in his activities, Adel Sellimi and Nizar Khanfir. He had abandoned his position against his will will Sami Trabelsi.