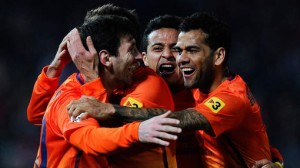 Come on, I like to repeat myself, but Lionel Messi lives up to his name! What a phenomenon! With Barcelona last night he scored twice against Granada!

He has reached 301! What can I say? It is magical, unique! And his career is far from getting over. Me what fascinates me is his simplicity, fidelity, he owe everyting to Barca, and his effectiveness! Always terrible!

With his meter, 69 m he became the highest scorer in the club’s history since last March – he had exceeded Cesar Rodriguez with his 232 achievements with Barcelona for the years 1940-1950.

Also note the homage of the assistant coach of Catalans, Jordi Roura: “There is nothing to add. What he does is simply amazing. “

Go up to the images! They are really good! Congratulations to Ariste!

But how far is he good to go?