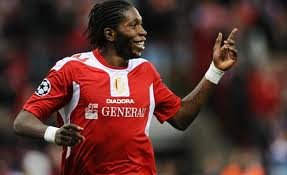 Dieumerci Mbokani always hungry for goals. Two goals in as many games since his return from the AFCON, the Congolese still think scoring 10 before the end of the season when he is 14 days. Leopard warned his opponents “I still want to put ten. Yes, ten would be good? I will finish top scorer then certainly with such total. “

The player is already 17 goals this season, the Golden Shoe wants to finish top scorer this season before leaving the club “I wanted to finish among the top scorers and I’m still in the race for the title. It is important for the club but also for me as part of a transfer at the end of the season. “

Last Friday, the former Monaco player scored a goal for his club against Charleroi.