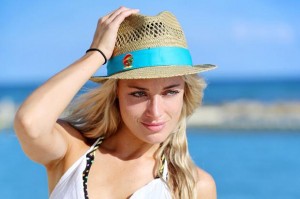 Miss Steenkamp, 29, was shot four times early on Thursday at Pistorius’s luxury home in a secure housing estate on the outskirts of Pretoria.

Today City Press, a South African news website, published a colour graphic of what it believes unfolded at Pistorius’s home.

It shows a female silhouette throwing her hands in the air as she loses her balance while a male character, purported to be Pistorius, points a gun at her.

It also depicts a blood-spattered cricket bat at the foot of the bed and shows bullet holes through a bathroom door.

The final scene shows the male figure carrying the female down the stairs with her arms and legs flailing loosely.

Police have rubbished speculation that Pistorius who is known to have kept a pistol by his bed and a machine gun at his bedroom window may have mistaken his girlfriend of three months for an intruder.

As he awaits the result of his bail application tomorrow, it was reported this morning that Pistorius accidentally discharged a gun in a busy Johannesburg restaurant – and nearly hit his friend’s foot.

The Paralympic star visited a branch of the South African restaurant chain Tasha’s with group of friends which included girlfriend Reeva Steenkamp in January this year.

According boxer Kevin Lerena, who was also part of the dining party, Pistorius was given the gun by someone else in the group.

He was examining the weapon when it suddenly went off, Mr Lerena claimed.

‘I got a huge fright, because the bullet hit the ground just centimetres from my foot’, Lerena told South Africa’s Beeld newspaper.

He went on: ‘I must emphasise that the gun belonged to one of Pistorius’ friends – I’m not going to mention his name.

‘Oscar just wanted to look at the gun, and it sort of snagged on his pants, releasing the safety catch.

‘A shot went off. I wouldn’t call him negligent, it was just an accident. He apologised to me for days afterwards,’ Mr Lerena reportedly said.

The restaurant’s manager Jason Loupis has said that he heard a ‘loud bang’ but that when he went to investigate, everyone on the table denied it was them.

‘I went to investigate when I heard the shot, but they all denied it,’ said Mr Loupis.

Mr Loupis said he did not inform the police as he could not be certain that a gun was fired.

Reeva Steenkamp will be buried tomorrow  the same day Pistorius appears before Pretoria chief magistrate Desmond Nair for the start of what is expected to be a two day long bail application.

Mike Steenkamp, who speaks for Reeva’s family, said: ‘For now, we are just focusing on getting over the funeral … on getting this part of the difficult journey behind us.

‘We’re trying not to think about Oscar or the court appearance. We have deliberately not watched TV or listened to the radio. We just don’t want to think about it. We want to blank it all out and focus for now on the here and now,’ he said.

Reeva Steenkamp’s heartbroken mother has spoken of her pain for the first time and said that she wants ‘answers’.

‘She had so much of herself to give and now all of it is gone‘, June Steenkamp told a local newspaper, ‘just like that, she is gone … In the blink of an eye and a single breath, the most beautiful person who ever lived is no longer here.

‘All we have is this horrendous death to deal with … to get to grips with. All we want are answers … answers as to why this had to happen, why our beautiful daughter had to die like this?’

However she echoed the call for ‘answers’, saying: ‘We want the truth to come out … everyone to be honest about what happened’.

South African police believe Pistorius may have beaten his girlfriend with a cricket bat before shooting her.

Yesterday it emerged that detectives are reported to have recovered a bloodied bat from the Paralympic champion’s bedroom and to have established that model Reeva Steenkamp’s skull had been ‘crushed’.

This and other evidence a smashed bathroom door, a 9mm pistol, the peculiar pattern of wounds on the body and reports of a row earlier in the evening is said to have led them to believe the murder case against the sprinter is ‘rock solid’.

Prosecutors have formally charged Pistorius with premeditated murder but the Blade Runner’s family say he firmly denies such a charge.

Pistorius is understood to have hired a heavyweight team of experts which include private detectives a pathologist who will conduct their own investigation into Miss Steenkamp’s death.

Yesterday it emerged that he called his close friend Justin Divaris shortly after the killing reportedly before the emergency services were alerted and told him: ‘There has been a terrible accident, I shot Reeva.’

Mr Divaris rushed to the house, where he said Pistorius repeatedly told him: ‘My baba, I’ve killed my baba. God take me away.’

While no officials would comment publicly on the case, a disturbing though disputed picture of what may have happened in Pistorius’s home started to emerge.

Neighbours have said they heard shouting coming from the house at around 1.30am. There were some suggestions, quickly denied, that the row may have been about Miss Steenkamp’s friendship with a rugby player.

At around 3.20am, four shots rang out apparently not all at once. The first person Pistorius called was his father Henke, 59.

When he arrived, he allegedly saw his son carrying his nightie-clad girlfriend down the stairs.

She had been shot in the head, hip, arm and hand. Pistorius and later paramedics struggled in vain to save Miss Steenkamp’s life.

When the police inspected Oscar’s bedroom, they found Miss Steenkamp’s overnight bag and iPad on the floor and the bedclothes were crumpled.

‘It was clear that both of them had slept in the bed,’ a police source told City Press.

Police reportedly found the bloodied cricket bat in the bedroom.

The en-suite bathroom door was riddled with holes, a pistol holster was found by Pistorius’s bed and a gun cartridge was on the floor.

South Africa’s City Press quoted an unnamed police source as saying: ‘The suspicion is that the first shot, in the bedroom, hit her in the hip. She then ran and locked herself in the toilet.

‘She was doubled over because of the pain. He fired three more shots. She probably covered her head, which is why the bullet also went through her hand.’

The source said police are carrying out tests to establish whose blood is on the bat.

While one scenario is that Pistorius attacked Miss Steenkamp with the wooden bat, it has also been claimed that the model may have used it to defend herself.

A third possibility is that Pistorius used it to break down the bathroom door. Those close to Pistorius have suggested that he may done so in a bid to ‘save’ his dying girlfriend.

Pistorius’s father, Henke, has defended his son by attacking the way the incident has been reported.

‘There is something fundamentally wrong with our society. We build people up into heroes, who overcome immense challenges, only to take great glee in breaking them down’, he told South Africa’s Times newspaper.

‘I want to say this: We are realists, not fools. This is not going to be easy but Oscar is strong beyond his years.’

According to this theory, the athlete first shot Miss Steenkamp by accident, whereupon she fled to the bathroom. He then shot at the door lock to try to get in, accidentally killing her.

Pistorius’s father appeared to suggest it is this version that he believes.

While he admitted that he had not talked to his son in detail about what happened, he said he had ‘zero doubt’ that the sportsman thought Miss Steenkamp was an intruder.

A more likely defence from Pistorius is to acknowledge that there was a row but that he did not intend to kill her.

Some in South Africa have speculated about the nature of Miss Steenkamp’s friendship with Springbok rugby player Francois Hougaard, and whether this played a part in the tragedy.

The 24-year-old was keen to distance himself from such reports at the weekend. His agent said: ‘This whole sad ordeal has got nothing to do with him.’

Last night Pistorius’s agent said he had withdrawn him  from all planned races but insisted his sponsors were sticking by him.

The tragedy has also cast fresh light on Pistorius’s apparent attraction to danger and weaponry.

As well as owning a pistol and machine gun, at the time of Miss Steenkamp’s death he reportedly had seven outstanding firearm licence applications.

One was for same type of assault rifle used in the recent Sandy Hook school massacre in the US.

Pistorius, who was charged with premeditated murder at a court appearance on Friday, spent the weekend in a police cell ahead of a second hearing planned for tomorrow at which his lawyers are expected to ask for bail.

Police say they will oppose the request.