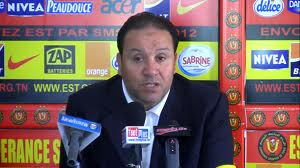 The new coach of the Carthage Eagles is a demanding man. To itself and to its first players. Evidence through the remarks in an interview with Jeune Afrique.

The main lines of his work

“I’ll meet players, contact, travel to see abroad. From what I know, the atmosphere was not very good in the group. There was a lot of indiscipline. This is a problem Tunisian, but I can assure you that I will make sure that discipline reigns. In South Africa, it is not only well, the team did not play well. We need to move things shake habits … “

“I do not have the time nor the desire to change everything. But I’m trying to convince Karim Haggui to come back in selection [defender Hanover Eagles former captain, announced his international retirement after the 2012 AFCON, Ed]. I will also speak with Yassine Ikari (Sochaux) … “

“There is also the case of Sapphire Taïder (Bologna). He was born in France [he played for the Blues in the youth categories, Ed], he can play either for her or for Algeria because his mother is Algerian, or to Tunisia, country of origin his father. His brother Nabil is Tunisian international. I hope to convince him. And I will also be by the end of the week my technical staff. “