The second round of the Euro League Women gets underway on Tuesday. That means many players with a shot at representing their respective countries at the 2014 FIBA World Championship for Women in Turkey will be in action.

There will be plenty of international firepower on show in the best-of-three tie between Bourges and Wisla Can-Pack Krakow. The Polish club has travelled to France with the competition’s leading scorer, and rebounder, in Tina Charles of the USA.

22-year-old point guard Wisla’s, Cristina Ouvina, is a star in the making that is in Spain’s national side. 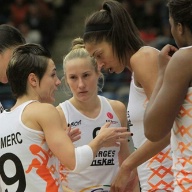 Elena Danilochkina (Russia) and Iva Perovanovic (Montenegro) will be with their national teams at the EuroBasket Women but right now, they’re leading the charge for a Nadezhda side that hosts a dangerous CCC Polkowice outfit in a second-round tie.

Polkowice has experience in Laia Palau (Spain) and Belinda Snell (Australia), and a rising star in USA hopeful Nnemkadi Ogwumike.

Ogwumike has shown everyone in Poland why she was the Rookie of the Year in the WNBA with the Los Angeles Sparks, averaging more than 18 points and almost eight boards in the Euro League.

The USA, by virtue of their Olympic title in London, and Turkey are the only national sides with spots secured at the 16-team World Championship for Women.