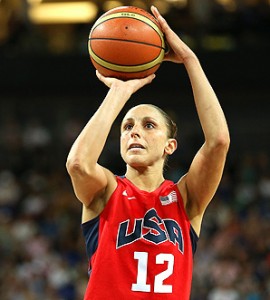 Diana Taurasi has been chosen USA Basketball’s female athlete of the year for 2012 after leading the Americans to a fifth straight Olympic gold medal.

Taurasi averaged 12.4 points a game to guide the United States to an undefeated record in London. She has won the award three times now, earning the honor also in 2006 and 2010, matching Lisa Leslie. Only Teresa Edwards has won the award more times with four.

U.S. coach Geno Auriemma said in a statement on Wednesday that Taurasi was “spectacular as a leader on and off the court.”

LeBron James was the USA Basketball male athlete of the year.