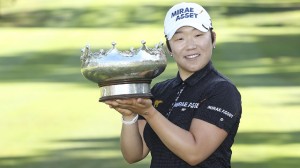 The 24-year-old South Korean had stood on the 14th tee tied with the 15-year-old Ko at 16 under par, but Ko took bogey after finding a fairway bunker and after Shin birdied the 15th, it was effectively over for Ko, the winner of the previous week’s ISPS Handa New Zealand Open, who finished in third place as the leading amateur.

Tseng fired the low round of the day, a 66, to shoot up to second position. She was still in the hunt coming down the 18th, but needing an eagle she hit her second shot into the trees left of the green and took a par. 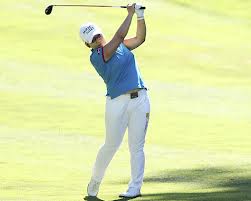 Shin stamped her authority on the championship when she hit a perfectly executed lob wedge chip shot into the 14th hole from thick rough.

Shin, who is once again a force in women’s golf after recovering from hand surgery last year, said the pressure that mounted over Sunday’s highlight made her lob wedge shot one of the best shots of her career.

Tseng eagled No. 6 to get her to 13-under and made the turn four strokes off the lead. It wasn’t until the middle of her back nine when she thought she might have a shot at catching Shin.