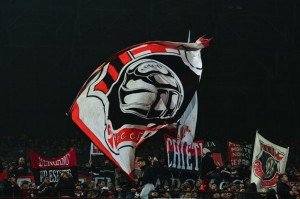 This is very marvelous when a team sees their supporter in park like this; it gives them more strength to be able to give all they have.

AC Milan supporters cheer their team by waving flags prior the Champions League football match between AC Milan and FC Barcelona on February 20, 2013 at San Siro Stadium in Milan.