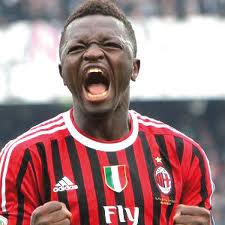 According to goal.com, Muntari and Kevin-Prince Boateng made the headlines on Wednesday night after scoring against the Catalans to set up an enticing Champions League second-leg

Ghana international Sulley Muntari has described his goal against Barcelona on Wednesday night at the San Siro as “the most important goal” of his career.

Another Ghanaian Kevin-Prince Boateng found his name on the score sheet with the opener for AC Milan during the second half in controversial circumstances after an apparent handball by Cristian Zapata in the build-up, before Muntari finished off a counterattack for the second goal with nine minutes to go.

The former Inter player’s strike in the 81st minute has set up an enticing second-leg at Camp Nou in three weeks, with the Catalans needing to score at least twice.

A jubilant Muntari stated after the game that his goal will never be forgotten in his football career.