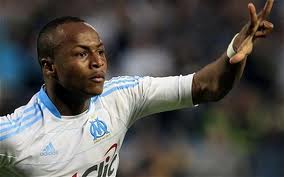 Ayew believes Olympique Marseille have what it takes to beat big-spenders PSG when both sides clash in Ligue 1 this weekend.

Olympique Marseillewill be looking to gain grounds on the leaders with a victory at the Parc des Princes on Sunday.

Elie Baup’s men will be facing the star-studded side twice in the space of three days with the Coupe De France game on the horizon.

“We know PSG are favourites, that are logical, but we will have some say in the matter,” Ayew said.

“We saw against Sochaux and against Rennes that they’re beatable. They’re not impossible to beat.

“If we play well, and get the rub of the green, anything is possible.”

And though the odds are stuck against Marseille, Ayew would rather draw inspiration from the heroic performance from Sochaux and Rennes – the two sides to have claimed famous victories against PSG.