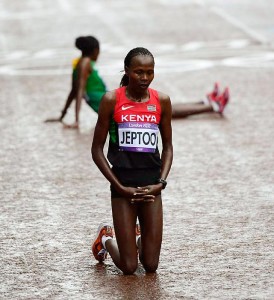 Priscah Jeptoo was born on 26th June, 1984, is a Kenyan long-distance runner who specialises in the marathon. She has won marathons in Paris and Turin and has a best time of 2:20:14 for the distance, set when finishing third in the 2012 London marathon, this performance earned her a place on the Kenyan Olympic team. She was the marathon silver medallist at the World Championships in Athletics in 2011. She began competing at top level competitions in 2008 and made the top ten women at the Saint Silvester Road Race that year. Her 2009 began with two wins in Portugal, at the Douro-Tal Half Marathon and then the Corrida Festas Cidade do Porto 15K race.

She won the silver medal in the 2011 World Championships in Athletics in Daegu, finishing in 2:29:00 and placing second behind countrywoman Edna Kiplagat. Jeptoo was part of a Kenyan sweep of the medals, with Sharon Cherop taking the bronze, making it the first time that a country had taken all the medals in the World Championships marathon. 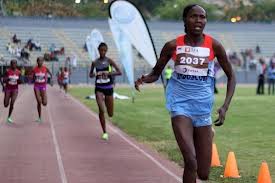 At the start of 2012 she finished second to Joice Chepkurui at the Discovery Kenya Cross Country. She ran a personal best of 2:20:14 at the 2012 London Marathon, taking third place. This performance gained her a place on the Kenyan Olympic team and she went on to take the silver medal in the Olympic marathon.