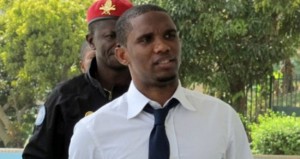 The cries of its employees for wages unpaid, does not preclude the star of realizing his dreams.

Samuel Eto’o, Cameroonian international footballer, and Anzhi Makhachkala striker is in Guinea. It has opened a new training center that he comes to finance.

This is his third training center after those who were open in Gabon and Cameroon. The aim of these centers is to identify young Guinean players and evolve into better conditions.

The center will accommodate approximately 100 students

Samuel Eto’o has been received by the Guinean authorities, including the Minister of Sports and Youth, Sanoussy Bantama Sow and President, Alpha Condé.

Tomorrow Saturday, the star of Cameroon will take place in several events. And Sunday, it will play a friendly match at Stade du 28 September with local players Syli national of Guinea.