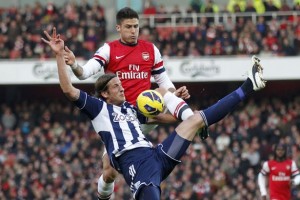 Queens Park Rangers manager Redknapp is desperate to strengthen his defence to help the West London club’s battle against relegation and has taken a shine to Olsson, whose outstanding form this season has also seen him watched by Arsenal.

QPR believe they have a chance of getting the 29-year-old centre-half, who will be subject to a £4m buy-out clause in the summer.

Redknapp hopes West Brom will decide to cash in now, rather than have to take a smaller fee at the end of the season.

Olsson is believed to fancy a move to London.