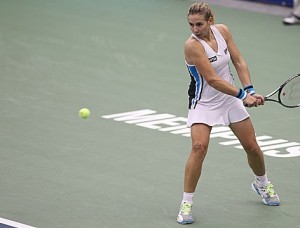 Marina Erakovic is one step away from her first WTA title after taking out Stefanie Voegele in the semifinals of the US National Indoor Tennis Championships. Sabine Lisicki awaits in the final.

As the semifinals took place in the court at the US National Indoor Tennis Championships on Friday, Marina Erakovic looked very strong and now she will hope for third time lucky as she goes for her first WTA title. Standing between her and that milestone will be Sabine Lisicki.

After some struggles early in the week – saving match point to win her first round match and again being pushed to three sets in the second round – Erakovic has only been getting better and better at the business end of the tournament, and that was evident on Friday as she converted all four of her break points and fought back from 4-2 down in the second set to beat Stefanie Voegele, 62 64.

“I thought today was a pretty tight match,” Erakovic commented. “I felt like both of us were nervous at the beginning but I managed to shake off those nerves in the first set and get going. The second set was tight, but I managed to get the break back and squeeze out the set, so I’m very happy.”

Erakovic is hoping for third time lucky on Saturday night – she has played two WTA finals before but finished runner-up both times, at Québec City in 2011 (losing to Barbora Zahlavova Strycova in the final, 46 61 60) and right here in Memphis in 2012 (losing to Sofia Arvidsson in the final, 63 64).

“I think I was fighting very well today,” Lisicki said after the match. “I was down 2-5 in the first set but kept fighting for every point – I lost in the semifinals the last time I played here three years ago, so I wanted to do a little bit better this time. That definitely helped me get through this match today.”

Lisicki is in her seventh WTA final and has gone 3-3 in her first six, with titles at Charleston in 2009 and Birmingham and Dallas in 2011 (and runner-up finishes at Tashkent in 2008, Luxembourg in 2009 and Pattaya City just a few weeks ago). Two of her three WTA titles have come on American soil.