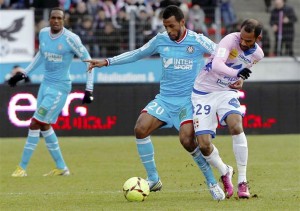 The Togolese international Alaixys Romao does not want to put pressure “unnecessary”. The new defensive midfielder of Olympique de Marseille has clearly not afraid of heavyweights of PSG that he will face this Sunday at the Classico.

“You know, nobody impresses me. I played with Adebayor in selection, I played against Eto’o … They are like us, like you. They have two arms, two legs. Do not put unnecessary pressure. Instead, it is up to you to be motivated to be better. That’s all …, “said the Togolese on foot365.fr.

“Beckham? It’s like me. He is a human being. I’m not going to bother with it. For me, he will be the same as if I played against another team less grouse, “said Romao Alaixys to the question of what the British player inspires him.
Read also: