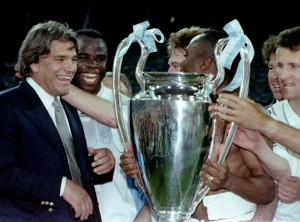 I said here on my blog of Africa Top Sports.com, that I think the management team of the OM is not up to par. I persist and sign, OM must have a larger ambition. Bernard Tapie that I continue to give consideration and call President and I have ambitions for our great club. He told, “It pains me when I see them lose and when they win, I’m crazy about happiness.”

And while we celebrate together the 20th anniversary of our victory in the Champions League, he even wants to bring investors capable of making us dream again. He even thinks of  investors in the Middle East. “It would be ideal, he quips. As a newspaper publisher, I have my own idea to help …”

I trust you President! The OM will play two games against PSG – Sunday league and Coupe de France on Wednesday, more than ever need a new team, money to hire real stars and great ambition.