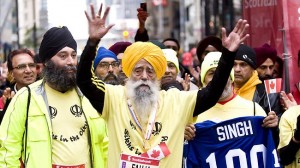 Unbelievable but true! Here’s a little unusual before the big game of tonight pitting PSG to OM at the Park.

His story is amazing! Fauja Singh started running at 89 years!! This old farmer from Punjab began to run after the death of his wife and son. Since then he has done nine marathons, including London and New York.

His best time was conducted in Toronto, 5 hours, 40 minutes and 4 seconds! It must be done!

Sunday, he ran 10 kilometers of the marathon in 1 hour, 32 minutes and 28 seconds, 30 seconds faster than last year

“This day is one of the happiest days of my life! I felt good, fresh, full of juice “

Fauja Singh will continue to run more than 15 km per day. He also takes advantage of his fame to raise money for charities.

He was carrying the Olympic Flame in the Olympic Games in Athens in 2004 and again at the London Olympics in 2012.