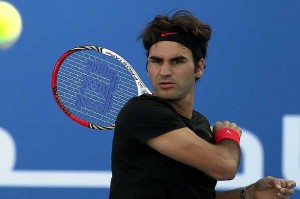 The 31-year-old top-ranking record-holder is only planning to play 14 tournaments this year, even dropping his home town tournament in Basel and the Miami tournament which has sometimes been described as the biggest outside the four Grand Slams.

Roger Federer bristled a little when it was suggested to him that his days as world number one might be at an end because of his reduced schedule, and only a few seconds were needed for him to knock that idea back.

Federer, who is now world number two, is already more than 4000 ranking points behind the leader Novak Djokovic, whose total is 40 percent more than the Swiss legend.

This means that the chances of the sport’s greatest legend adding to his record total of 302 weeks at the top would appear to be significantly reduced.

But Federer immediately contested that. “It’s definitely realistic if I’m playing great, but I need to play absolutely great,” he said, before expressing his doubts.

“I can play great, but will I be allowed to? Time will tell. My big focus is on making sure that every tournament I enter I am perfectly prepared. I am hopeful I will get enough matches but if not my schedule can be changed.

“I need to make sure I have enough time off, so that when 2014 comes I am in a position with options which I almost wasn’t this year to a degree.”

This is a reference to the options which will be open to him in 10 months time according to ATP Tour rules. These reduce a player’s mandatory commitments to Masters events by one tournament for each of the following milestones – 600 career matches, 12 years’ service, and 31 years of age.

But because Federer will have achieved all three, he will be able to skip as many as he wishes without penalty.

For this and other reasons Federer also insists he can extend his all-time record of 17 Grand Slam tournament titles.

“I strongly believe I have more Slams in me,” he said. “Which Slam do I favour – does Wimbledon over-weigh the rest? Maybe, but looking back there have been amazing moments with each Slam.

“It depends how long I play. But I don’t want to be depending on that. I am trying to be smart with my schedule. I am practising more.

“Your prime is 23 to 27 or 28 so for me it’s very challenging – and exciting. I need to make the right decisions. I have family and not many guys have that.”

Federer was even more adamant that retirement was not close. “I want to give myself the best chance to play as long as I can. Maybe then it will become clear that it is time to stop. You know things change very quickly, and you have to be ready and open about it.

“But I would like to give myself the chance to play for many years to come. I am happy with the way my body is. I am healthy and happy to be playing. And as for the number one ranking and Grand Slams, they are still really important to me.

“If I feel confident and am enjoying it I hope to play for a long time. I think I am playing excellent tennis. Some win Grand Slams at 16 and others at 34. It depends how you see things.

“The over-30 guys are extremely consistent. I think I can play good tennis not playing so much.”

Federer’s realism was shown by his reaction to Rafael Nadal’s predicament as he tries to return to his former eminence after injuries and many months out of the game.

Not only did Federer show sympathy for Nadal but emphasised that others had something to learn from him.

“It’s not only him who needs to be careful but all of us,” Federer emphasised. “How much travelling can you do? How much training? How much sleep does the body need? How much time away from the game do you need? Everyone is different.

“At the end of the day the body and the mind can only take so much.”

Federer’s new time-and-energy economy will mean that he takes fully seven weeks off between next months Master Series in Indian Wells and the clay court season in May. he has played on three matches since the Australian Open four weeks ago.

A test of the effectiveness of this will begin at the Dubai Open on Monday when he plays a first round against Malek Jaziri, the world number 130 from Tunisia.