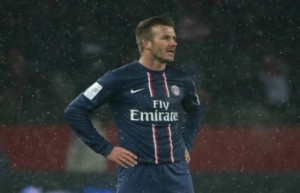 David Beckham has played and won its first game last night with Paris-SG Sunday against Marseille (2-0).

The 37 year old came off the bench to make a 15 minute cameo and the Parc de Princes and played a part in the second goal, which came from Zlatan Ibrahimovic.
“It was a special night for the team and for me,” Beckham told reporters after the match.

“I received a great welcome. To wear the PSG shirt and get on the pitch, it was all very special.

“The reception before the game and when I came on was great. I am very happy and very proud to have a chance to play in a great league with a great team.

“It’s great to be among all these great players. Coming here, at my age and during the transfer window, I do not expect to play every game, but that’s the goal.”

The former England captain also revealed how he was nervous ahead of making his debut.

“Of course, especially against the team third in the table, and with me trying to catch up [with fitness]. It’s a big game, the biggest in France,” he added.

“When it’s 1-0 we know that it can go in either directions. If you go on and they score…Fortunately, the opposite happened.

“It’s good to start with. On my first two or three passes, my feet were a little frozen! To win against Marseille and increase our lead on them to eight points, it was a very important victory for us.

“There was slight nerves. I have always said it was a big challenge since I signed for Paris.

“Playing in America for six years and then wanting another challenge meant there was a little bit of pressure. But I really enjoyed the evening, as I have enjoyed the last 10 days. It was hard to get back in shape but I feel good, it’s going well.”