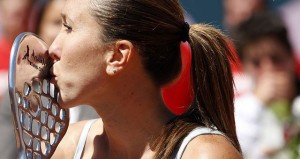 on Sunday afternoon Jelena Jankovic saved her very best for the final of the Copa Claro Colsanitas, having survived some marathon matches to get there, , cruising past Paula Ormaechea in straight sets for the 13th WTA title of her career at the first clay court event of the year.

The No.1-seeded Jankovic was pushed to the extreme in two of her first four matches of the week, battling over three hours to get by Julia Cohen in the first round and needing a third set breaker to beat Karin Knapp in the semifinals. But there was no such drama against Ormaechea in the final, as Jankovic held all eight service games and needed just an hour and 14 minutes to win, 61 62. 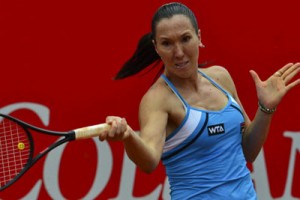 “I’m very sorry I cannot speak in Spanish!” Jankovic apologized at the start of her acceptance speech. “But first of all, I want to congratulate Paula for such a great tournament this week, playing so well and beating such good players. I’m sorry I had to beat you today, Paula. But I think you’re playing really good tennis and I wish you the best of luck for the rest of the upcoming season.”

“I had a wonderful week here. It’s been an amazing experience. I’m so happy I was able to come here to Bogotá for the first time and winning my 13th WTA title here makes the experience even better.”

Jankovic collected her 13th WTA title – but more importantly, this was her first WTA title in almost exactly three years, her last one coming at Indian Wells in 2010 – she had lost all five of her finals since then (Rome in 2010, Monterrey and Cincinnati in 2011, Birmingham and Dallas in 2012).