We know that the su 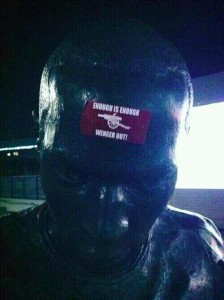 pporters of Arsenal have had enough of Arsene Wenger.

His departure is more than ever required. Besides numerous banners at the Emirates, fans found a more efficient way.

A supporter had the ingenious idea to go and stick it on the statue of Thierry Henry, a label on which is written: “Wenger out”.