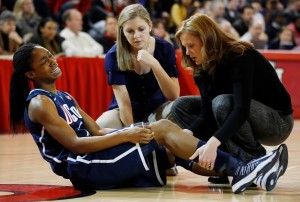 As painful and heart wrenching as it might have been three weeks ago when she was informed that her sophomore season at UConn was over due to a torn anterior cruciate ligament in her right knee, it wasn’t until two weeks later that the frustrating reality of it all really began to sink in for Brianna Banks.

While hardly jumping for joy during the first four games she missed, it wasn’t until she was overcome by a sense of helplessness seeing her teammates wilt in the second half of Feb. 18 loss to Baylor that Banks had to face to cruel hand she has been dealt.

“It is a lot harder to watch how hurt the team is and feel like you could have done something to make it better,” Banks said. 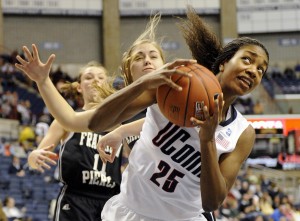 Banks will miss her seventh straight game when the third-ranked Huskies play Pittsburgh at the XL Center (7 p.m., SNY) in the final regular-season home game. The good news is a surgery has been scheduled for March 14 to repair the torn ligament.

After struggling as a freshman, Banks had worked her way into an important role for the Huskies coming off the bench. She had already recorded more points, rebounds and assists while making six times as many 3-pointers in 21 games this season than she did while playing in 32 games as a freshman.

The play which led to the injury seemed so innocent when she drove to the basket in a Feb. 2 win over St. John’s. She fell to the ground and felt the knee buckle.

“I feel like it is my fault,” Banks said. “I had Kelly (Faris) in the corner. I should have dished it, and if I had dished it, I wouldn’t be here.”