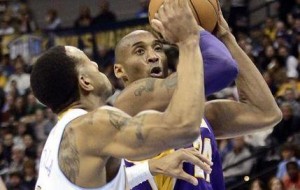 Discontinued for the LA Lakers on Monday night. Against a team of Denver, monstrous in attack against (33 points against 3), Californians are inclined at the Pepsi Center, 119-108 and see their winning streak stopped at three.

The Nuggets have made a selfless Andre Iguodala with 12 assists and 14 points, Wilson Chandler (23 pts) and Ty Lawson to consolidate their fifth place. In front of Kobe, the best player of the past week in the West undermined early (6 shots missed 7) and ends the encounter with 29 points. If he is cracked of a double-double (15pts, 14 rebounds), Dwight Howard shined with awkwardness to throw a 3/14.

Los Angeles misses an opportunity to balance its balance sheet. With 48, 27% of victories, the men of Mike D’Antoni are still 9th in the West.