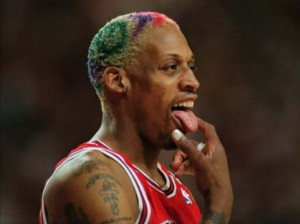 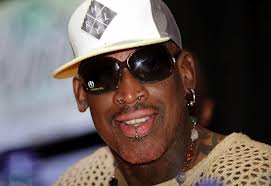 The colorful former NBA star Dennis Rodman is heading to North Korea , to become an unlikely ambassador for sports diplomacy at a time of heightened tensions between the US and North Korea.

Rodman, three members of the Harlem Globetrotters basketball team, and a film crew from the Vice media company are visiting the communist country to shoot footage for a TV show set to air on HBO in early April, Vice told the Associated Press before the group’s departure from Beijing.

It’s the second high-profile US visit this year to North Korea, a country with which it technically remains at war following the Korean war. The visit comes two weeks after North Korea conducted an underground nuclear test in defiance of UN bans against atomic and missile activity.

Eric Schmidt, the executive chairman of Google, met officials and toured computer labs in Pyongyand during a surprise four-day trip in January, just weeks after North Korea launched a satellite into space on the back of a long-range rocket.

Washington, Tokyo, Seoul and others consider both the rocket launch and the nuclear test provocative acts that threaten regional security.

North Korea claims the satellite launch is a peaceful attempt to explore space, but says the nuclear test was meant as a deliberate warning to Washington. Pyongyang says it needs to build nuclear weapons to defend itself against the US, and is believed to be trying to build an atomic bomb small enough to mount on a missile capable of reaching mainland America.

Vice said the Americans hoped to engage in a little “basketball diplomacy” in North Korea by running a sports camp for children and playing games with local people and by competing alongside North Korea’s top athletes in an exhibition match they hope will be attended by the leader, Kim Jong-un.

“At a time when tensions between the two countries are running high, it’s important to keep lines of cultural communication open, no matter how non-traditional those channels may be,” said Shane Smith, the Vice founder who is hosting the TV series. “It’s important to show North Koreans that America is not their enemy, and playing a game we both love is a step in the right direction.”

In a now-defunct US-North Korean agreement by which Washington had planned last year to give food aid to Pyongyang in exchange for nuclear concessions, Washington had said it was prepared to increase people-to-people exchanges with the North, including in the areas of culture, education and sport.

Promoting technology and sport are two major policy priorities of Kim Jong-un, who took power in December 2011 following the death of his father, Kim Jong-il.

But the flamboyant Rodman, with his maze of tattoos, nose studs and neon-bleached hair, seems an unlikely diplomat to be sent to a country where male fashion rarely ventures beyond military khaki and facial hair is forbidden.

During his heyday in the 1990s, Rodman was a poster boy for excess. He called his 1996 autobiography Bad as I Wanna Be and showed up wearing a wedding dress to promote it.

Shown a photo of a snarling Rodman, piercings dangling from his lower lip and two large tattoos on his chest, one North Korean in Pyongyang recoiled and said: “He looks like a monster!”

But Rodman is also a Hall of Fame basketball player and one of the best defenders to have played the game. During an often controversial career, he won five NBA championships – a feat that quickly overshadowed his antics for at least one small North Korean group of basketball fans.

Along with football, basketball is enormously popular in North Korea, where it is not uncommon to see basketball hoops in hotel car parks or in school playgrounds.

North Koreans have limited exposure to US pop culture but Michael Jordan, a former teammate of Rodman when they both played for the Chicago Bulls in the 1990s, is well known.

During a historic visit to North Korea in 2000, the then secretary of state, Madeleine Albright, presented Kim Jong-il, an NBA fan, with a basketball signed by Jordan that later went on display in the huge cave at Mount Myohyang that holds gifts to the leaders.

North Korea even had its own Jordan wannabe: Ri Myong Hun, a 2.4-metre (7ft 9in) player who is said to have renamed himself Michaelafter his favourite player and moved to Canada for a few years in the 1990s in the hope of making it into the NBA.