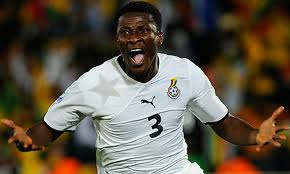 Communications Director of the Ghana football Association, Ibrahim Saanie Dara has reiterated that calls for Asamoah Gyan to be stripped off the Black Stars captaincy are baseless, adding that the Al Ain forward would be maintained as the leader of the senior national team.

Asamoah Gyan who was confirmed captain of the Black Stars barley six months ago has come under severe criticism for failing to offer any form of inspiration and leadership when the going got tough for the senior national team at the recently ended Africa cup of Nations in South Africa.

Gyan who has been Ghana’s target man for the last six years scored only once for the Black Stars at the tournament but head coach Kwesi Appiah has continually maintained that the technical team was highly impressed by Gyan’s overall contribution despite scoring few goals at the tournament.

Gyan took over the captaincy from defender John Mensah who was also criticized for lacking the ability to inspire at difficult times. The two have often been measured by the high standard demonstrated by Stephen Appiah who led the Black Stars to two successive world cups in 2006 and 2010.

Appiah has been by popular acclamation described as the best captain in the history of the Black Stars but the GFA has given Gyan the backing to succeed as captain of the team.

“Asamoah will be maintained as captain, the GFA is very impressed with the way he behaved himself and the way he encouraged the other players at the recently ended Nations Cup on South Africa.”

Asked whether Muntari was not ahead of Gyan on the seniority ladder, Sannie stressed that it should not be a problem at all.

“John Paintsil is a senior player; Derek Boateng came into the Black Stars long before Gyan but they all had no problems with Gyan so Muntari would have no problem with the Al Ain striker’s leadership.” Sannie said on GTV’s Stage Africa sports programme