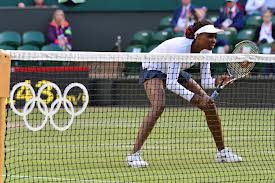 Venus is the top-seeded player in Brazil with 20th ranked. She is playing her first tournament with Maria Sharapova if Williams win over Sharapova then she is paying a prize for the losing in the third round of the Australian Open in January to Maria Sharapova.

Venus Williams beat Garbine Muguruza of Spain 6-4, 2-6, 7-5 to reach the quarterfinals of the Brazil Tennis Cup on Wednesday.

Venus converted on her fourth match point to beat the 96th-ranked Muguruza in 2 hours, 12 minutes on hard court at the southern Brazilian city of Florianopolis.

The American had squandered three match points at 5-4 after getting back on serve late in the third set, but finally closed out the match with her first break point of the final game.