The European Indoor Championships get underway in Gothenburg, Sweden, today with a -strong team representing GB and NI.

Holly Bleasdale (coach: Dan Pfaff, Scott Simpson) will go into the pole vault with a European leading mark of 4.77m set at the British Athletics European Trials and UK Championships in Sheffield earlier in February. The 21 year old, who finished sixth at last summer’s Olympic Games, is in confident mood ahead of her assault on European Indoor glory.

“I’ve never had to handle the pressure of being one of the favourites before in a major championship, so I’m really excited to go out there in front of the crowd and do well for Great Britain. I’m coming into shape just at the right time, so hopefully everything will work out this weekend.” 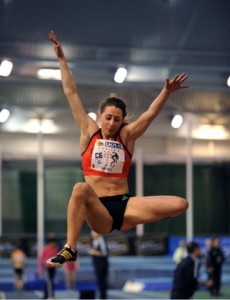 Perri Shakes-Drayton (Chris Zah) and Eilidh Child (Malcolm Arnold) are ranked second and third in Europe for the individual 400m and will head to Sweden in good form off the back of the British Athletics Grand Prix where Shakes-Drayton set an indoor personal best and Child ran a new Scottish record.

“I’m going to go out there and do the best I can do, there’s a lot of girls who have ran a lot more races than me, but I’m in good form, so hopefully I’ll have a good weekend”, said Shakes-Drayton.

“I would love a medal, there could be girls that come out of the woodwork – I would love a gold, but I’ve got to do the business first,” added the World Indoor Championships 4x400m gold medallist.