Azahara Munoz who is a native of Spain quickly made herself feel right at home as the HSBC Women’s Champions settles into its new residence at the Sentosa Golf Club (SGC) in Singapore.

The 25-year-old Spanish girl, with just two practice rounds to familiarize herself with The Serapong course, was near flawless as she took apart the golf course with seven birdies for a seven-under 65 that sees her grab the lead at the HSBC Women’s Champions after Thursday’s opening round.

This is the first time the US$1.4 million tournament is staged at the Sentosa Golf Club, having previously been hosted at the Tanah Merah Country Club for the preceding five years. 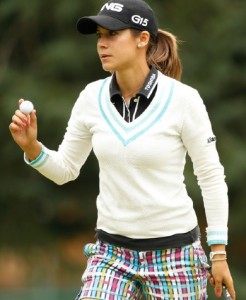 Declared Munoz, who was in the first flight out and returned to the club house with a two shot lead, “It’s one of my best opening rounds. I hit a lot of fairways and when I didn’t, I still hit the green which was the key today. I hit a lot of really good second shots so I gave myself a lot of birdie opportunities, and then obviously I converted a lot of them.”

With three rounds still to play however, the prospect of lifting the prestigious HSBC Women’s Champions trophy on Sunday remains a distant target for Munoz, particularly with some of the game’s leading lights in hot pursuit of the Spaniard.