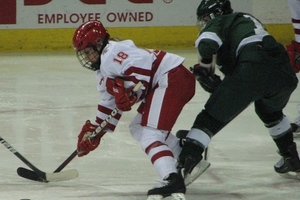 The USA Hockey Foundation today announced the Top-10 finalists for the 2013 Patty Kazmaier Memorial Award. The award, presented annually to the top player in NCAA Division I women’s ice hockey, will be presented at the University of Minnesota’s McNamara Alumni Center Saturday, March 23, in Minneapolis in conjunction with the NCAA Women’s Frozen Four.

The selection process began in late February, when NCAA Division I women’s ice hockey coaches were asked to nominate players for the award. Players who were nominated by two or more coaches were then placed on an official ballot, which was sent back to the coaches to vote for the Top-10 finalists. The independent accounting firm PricewaterhouseCoopers, LLP, tabulated the ballots.

The three finalists, including the recipient of the 2013 Patty Kazmaier Memorial Award, will be chosen by a 13-member selection committee comprised of NCAA Division I women’s ice hockey coaches, representatives of print and broadcast media, an at-large member and a representative of USA Hockey, the national governing body for the sport of ice hockey in the United States. The Top-3 finalists for this year’s award will be announced on Thurs., March 7. 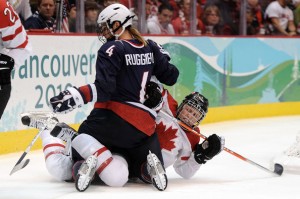 Tickets to the 2013 Patty Kazmaier Memorial Award Ceremony and Brunch can be purchased at PattyKaz.com. Individual seats to the event are $65, while tables of 10 are available for $600. A select number of sponsorships and program advertisements are also still available.