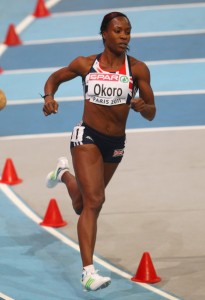 Marilyn Chinwenwa Okoro was born on 23 September 1984 in London, she is a British athlete of Igbo Nigerian ancestry. She finished third in the 800 metres at both the 2007 and 2008 IAAF World Athletics Final.

She was on the bronze winning 4 × 400 m relay at the 2007 World Championships in Athletics. She represented Great Britain at the Beijing Olympic Games in 2008 and finished sixth (1:59.53 mins) in the semifinals.

On 26 June 2007 Okoro graduated from the University of Bath with a B.A. degree in politics and French, then starting her first season as a fulltime athlete.

She speaks four languages (English, French, Spanish and Igbo) and sings in the jazz band The Felonius Monks. Marilyn suffered an injury plagued 2009 outdoor season, though she battled through the pain barrier to finish a very credible 8th in the World Championship 800m final in Berlin.

Okoro was also included in the squad for the 4x400m but was not selected in the lineup to run in the final. During the 2009 winter Okoro, along with training partner Montell Douglas had major knee surgery to try to eradicate the problems that hit her ’09 track season.

There has been some criticism that the Lee Valley track. 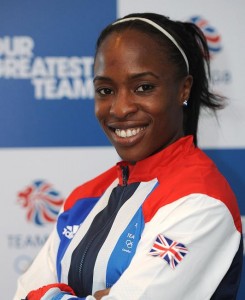 Marilyn has had a limited race schedule in 2010, but returned to a degree of form when taking bronze at the UK championships. Subsequently Okoro was selected to challenge for a medal in the 800m alongside Jenny Meadows and Jemma Simpson at the 2010 European Championships in Barcelona. She finished 4th in her semi final, therefore did not progress to the final. Okoro recovered from that disappointment to run the second leg in the 4x400m bronze medal winnng quartet alongside Nicola Sanders, Lee McConnell and Perri Shakes-Drayton clocking 52.0 seconds for her leg. She also ran in the heat running 51.8 seconds.